It takes a bright sunny weekend to break the stupor brought about by cloudy days of Seattle. And today was such a day. I had not biked north of my place for a long time (almost a year now). Sensing a chance to restart serious biking before fall sets in, I set out north of my place towards the Sammamish River Trail. I took a book along with me. The problem with this book is that it is dark and gloomy, describing a dystopian society and as I later realized, it was the absolutely wrong book to take out to read during such a bright and cheerful day. The journey to the trail was effortless, since it is completely downhill from my place. I started late in the afternoon so that I would not have to face traffic on the trails. Following the 520 bike trail, I was there in a couple of minutes. I got off at Leary Way and biked till about NE 116 St.

The trail was beautiful today. As expected, lots of people were strolling, jogging or biking on the trail but I encountered little or no traffic on my way up the trail. This allowed me to slow down and enjoy the view rather than looking back every few seconds for yet another biker doing a time-trial on the trail, eager to overtake me. What makes this worse is the fact that bikers just creep up behind you with no warning whatsoever. Some do have the courtesy to announce, “On your left” but that applies to just a few of them. 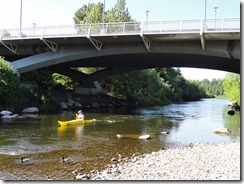 I also saw one kayaker.

After reaching NE 116 St, I decided to head back to a nice spot I saw near NE 90th St to finish my book. It is a level spot with rocks where you can sit and read, enjoying the view of the river. But by the time I returned to the spot, it had been overrun with a bunch of ducks doing their own thing and a gaggle of geese swimming with their young. Realizing the futility of my reading exercise (no pun intended), I just sat down and took pictures. 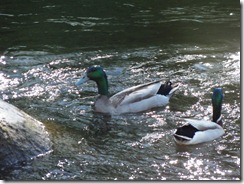 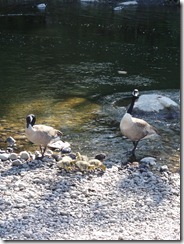 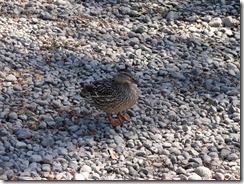 Soon I was joined by parents and their excited kids (humans, if this was not clear already). Some of them had even got food to feed the ducks! Apparently, this place was a regular duck/geese hangout place that I did not know about. Pretty soon the place was full of excited ducks going quack-quack while indulging in their feeding frenzy. 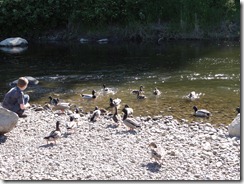 Now for the finish. All that lay between me and my safe return home was climbing back the (now a steep climb) 520 trail. I bravely mounted my bike and started home but realized that I am not in a shape to climb the steep onramp from Leary Way. I finally gave up on the final few feet of the on-ramp (and walked the bike for that stretch). I guess I still have to practise hill climbing on the bike.