I have been wanting to write a post after coming to US but hadn’t got the time to do that. Now that I am in the middle of the semester, I finally got the urge to write about it. partly because there is this Labo( u )r day weekend, when I have almost nothing to do but go through my study notes. A picture that I took just now will tell, how empty the area really looks! 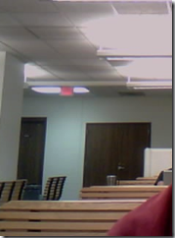 The first thing that struck me about this country was that it is huge. No, wait, everything is huge; buildings, roads, cars, supermarkets, vegetables, Internet connection speeds (yes Europe has more, but they are getting here with fibre-optics) & USA is the place where supersizing started.

Georgia Tech is fine, don’t ask me much about it. I have taken up a course in Computer Graphics (seems a little advanced which is good), course about GPU programming and Multi-core processor programming (cool!, but have yet to start with the fun, I mean, tough part), Software Engineering (yes, I still need to learn how we make software, Microsoft wasn’t good enough 😂 and High Performance Computer Architecture (similar to ACA in NSIT but more current). No heavy special projects for me yet, am trying to see how this goes and will definitely work on one next semester.

Found two of my relatives living around Atlanta, have been to their place and enjoyed it! Both have young kids and they got along with me pretty well (or did I get along with them well, dunno).

About the title, yes, you would hardly find anyone walking on the streets except perhaps in the morning when they are out for jogging or when they need to reach their car; rest of the time people drive. Now gas (petrol for Indians 😉 is no longer what one would call cheap here but I guess that people have become so used to driving that they cannot seem to do without it. There is a mini public transport system in Atlanta called MARTA but its so small that it would look like a toy train in front of the Delhi Metro. But then Delhi has n times the population of Atlanta and 1/n times the area of the city. So I guess that such a small train would be OK for the city, especially when half the people live miles away from the downtown area where most of the offices are.

Oh yes, I got a new laptop. A Dell Vostro 1500 with GeForce 8400 graphics card (OK so its not a good as the 8800, but I don’t have fat pockets you know!). I got the card just for DirectX 10 support (which I learnt has a programmable graphics pipeline) and I plan to keep the laptop for a pretty long time, at least 3 years if not more.

Will stop here or my post, else it will start looking like an article. Will add more later, till then, I hope this blog will stay alive!